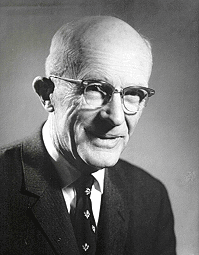 For a man who lived in Chinook only a short span of his life, Lloyd D. Sweet created a legacy that has changed a multitude of lives. No one would have dreamed that his inquiry about a local scholarship fund in 1971, would eventually be a very substantial scholarship foundation available to any graduate of Chinook High School. In 1988 Lloyd D. Sweet Passed away in Watsonville, California. To all graduates of Chinook High School, he will be remembered for the generosity that changed many lives.

Lloyd D. Sweet was born in Ubet, Montana, on October 16, 1889. In his early years, he and his family moved to Chinook. He graduated from Chinook High School in 1909. In 1913, he graduated from Stanford University with a major in economics. Following graduation he returned to Chinook where he worked his father’s land and built a flour mill. In 1918 he joined the Navy and left Chinook. He settled in Watsonville, California where he built his fortune in the stock market while in the auto parts business.

In June of 1971 Mr. Sweet wrote a letter to the local MEA Organization inquiring about scholarships that he had read about in the Chinook Opinion. After being informed that MEA was a non-profit organization, Mr. Sweet sent the letter that started one of the largest scholarship funds in Montana in August, 1971. In December of 1971 the Lloyd D. Sweet Educational Foundation was formed.

Mr. Sweet’s conditions were straight forward. All scholarships were to be awarded only to students of the Chinook Public Schools. He requested that the Foundation Board consist of five directors to carry out his wishes.

The Lloyd D. Sweet Educational Foundation is a non-profit 501(c) (3) organization that qualifies for charitable donations.